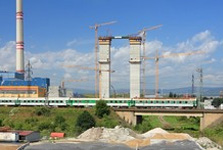 The largest building in the country is coming into being in the Ledvice power plant in the Teplice region. CEZ is building here a giant, 145 m high boiler house which the company's representatives nickname the pyramid of Cheops. It was exactly this Giza monument that the ancient Egyptians built to the very same height. At this construction, Kranimex ensures, in cooperation with the Metrostav company, the supply of all Liebherr tower cranes.

The unique structure will have no equivalent in our country. According to the Wikipedia Internet encyclopaedia, there is currently no higher building in the country. The highest building in the Czech Republic so far, the City Tower Hotel in Prague, has the height of 109 metres.

The Usti region holds one height record already now. In Most, the highest building outside Prague stands: the SHD-Komes office building which is 96 metres tall. It also appears in the international database of skyscrapers.

The Ledvice boiler room is being built on the site of a former CEZ office building which were pulled down by the company in January 2009. The entire facility will stand on a platform made of a special concrete mixture (83 thousand cubic metres of concrete) with dimensions 80 by 130 metres. It will be eight metres deep and it will be supported by more than 800 piles. The realization of the construction parts is performed by the Metrostav company.

By the Spring, digging was performed here, then concreting and, in about one year's time from now, the bottom structure of the boiler room and the machine room should be completed. Even before one can see this building, two concrete towers are seen between which a steel structure and the boiler room itself will be installed.

These towers will include staircases and both freight and passenger lifts. Through their shafts, also the main cabling routes will lead. They are resistant to fire which is important also from the security point of view for the evacuation of the structure. On one of the towers, there will also be an observation floor for any potential visitors who may visit the power plant on an educational field trip.

The launching of the trial operation of the new block with the output of 660 MW is scheduled for the end of 2012. CEZ will expend more than 30 billion crowns on the whole construction. This will be the most state-of-the-art facility producing power by burning brown coal both in the Czech Republic and in Central Europe.

A project to supply a USC turbine for the Ledvice power plant was won by the ŠKODA POWER company.

The contract is of great importance not only in terms of its volume and finance but especially because this is the first project when a new technology and material will be used in building a power plant block.

After having been put into operation, Ledvice will be the most state-of-the-art power plant not only in the Czech Republic but also in Central Europe. The production of power in the new block will be very environmentally friendly and the gross efficiency will reach about 47 % which will reduce the production of carbon dioxide and other emissions.

Seven tower cranes The supply of all Liebherr tower cranes, including the crane operators, is ensured by Kranimex, in cooperation with the Metrostav company. In the course of construction, the following cranes are in operation:

With regard to the above-the-standard hook heights in cranes no. 4 and no. 5, Kranimex equipped these cranes with GEDA personnel hoists. They provide the Kranimex company's crane operators or service workers with quick and easy access to crane cabins. This is the very first combination of a tower crane with a personnel hoist in the CR. As far as the preparation of the project of Liebherr tower cranes placement and anchoring is concerned, the Kranimex company cooperated very closely with the technical department of the Liebherr production plant in Biberach, Germany. The result of this cooperation is a solution that provides maximum satisfaction to all firms participating in the realization of the above project.