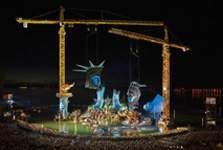 A pair of Liebherr tower cranes are to play a central role in a production of the opera Aida at the Bregenz Lakeside Theatre in Austria.

Liebherr says the theatre features the world's largest open-air opera stage, which floats on Lake Constance, and will stage Aida during its 2009 and 2010 seasons.

The 550 EC-H 40 FR.tronic and a 280 EC-H 12 Litronic have been erected on timber piles driven into the bed of Lake Constance, and will form part of the stage, as well as moving important elements of the set.

The profiles of the towers and jibs form a giant frame around the stage, with lighting creating shadows from the lattice structures of the cranes that are integrated as an artistic element of the opera.

The two cranes will also work in tandem to lift two complementary mask elements onto the stage and bring them together in mid-air to form one giant hovering mask.

Both cranes have been equipped with stepless FC drives and the ABB work area limitation system, which Liebherr said makes the task of moving the mask pieces easier. Liebherr has also put the crane drivers through special training to ensure they are able to carry out the “demanding and difficult manoeuvre” during more than 60 performances.

The two towers are not the first Liebherr cranes to have been used by the Bregenz Lakeside Theatre in its performances, with an A 71 K fast-erecting tower used permanently to set up backdrops since 2000. It is erected on a pontoon measuring 15m x 13m.